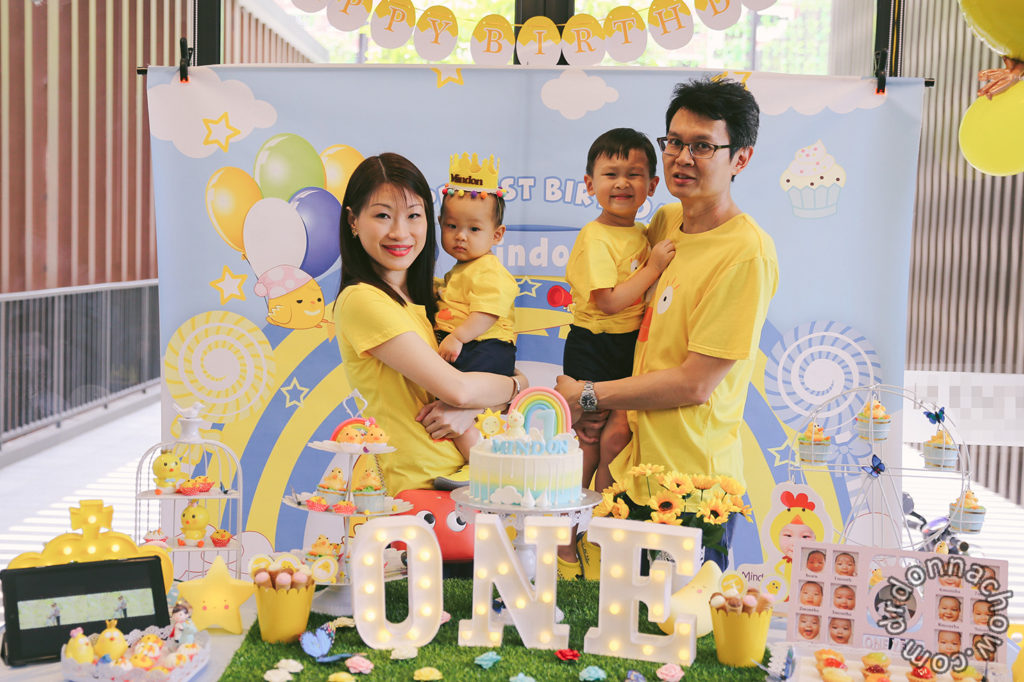 It took me a while to post an update. For the past few months, I have been busy decluttering the house, caring for the little ones and coping with a job change. Glad that I have finally found some time to post an event which happened quite some time back – Mindon’s first birthday celebration!

As mentioned three years back in my earlier post on Kandon’s first birthday, one year old parties are often a major celebration for most mummies, myself included. I hope to make it as memorable as possible for Mindon even though he may not recall much of what has taken place on this day. Photos will be a great way to keep some of these memories alive for the years to come. 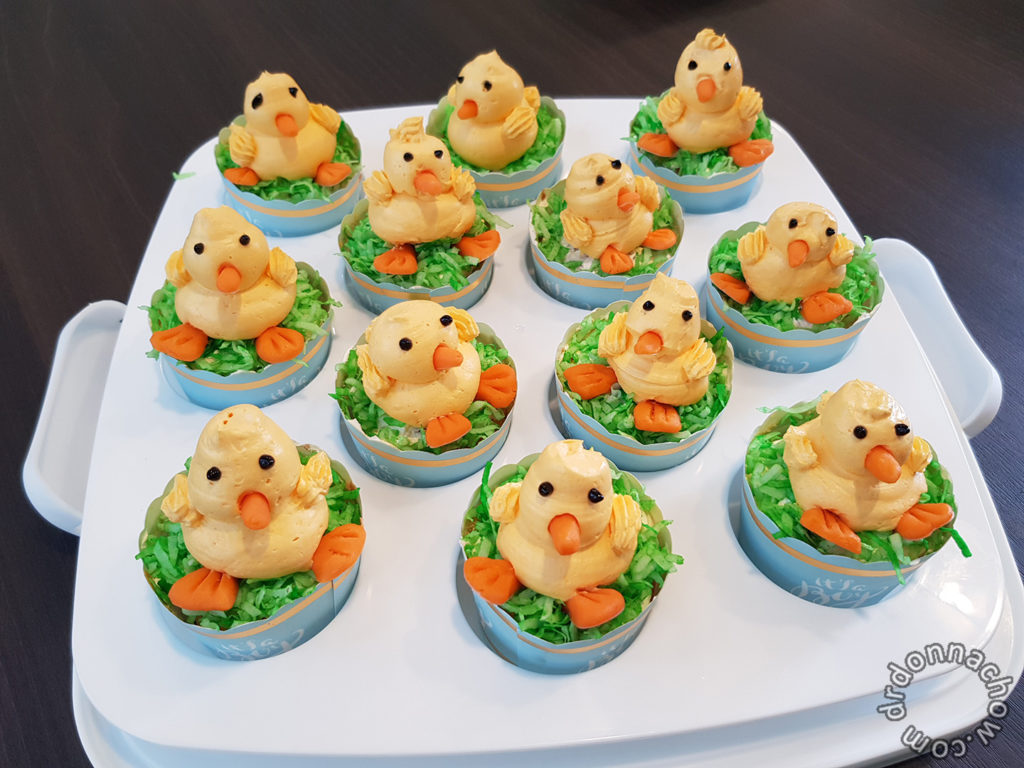 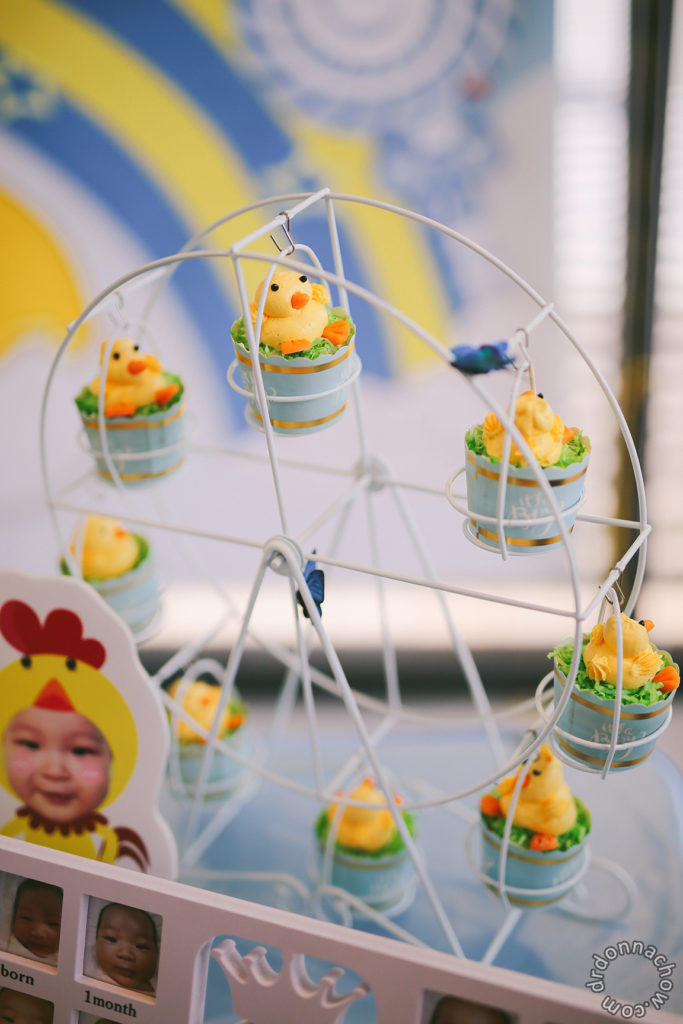 Chicken cupcakes on a ferris wheel

Since Mindon was born in the year of the Rooster, I decided to do a Chicken theme party for him. I took it upon myself to oversee the entire preparation – including the designing of the invites, decoration of the venue, setting up the cake table and baking the desserts for the guests.

For months, I have been experimenting on baking chicken cupcakes. I used my buttercream recipe found in this earlier post and learnt to pipe baby chicks after watching  You Tube tutorials. The final product was a yellow buttercream chick sitting on a layer of green coconut shavings, on top of a chocolate chip cupcake. The chicken beaks and feet were hand crafted from melted white chocolate with orange colouring. 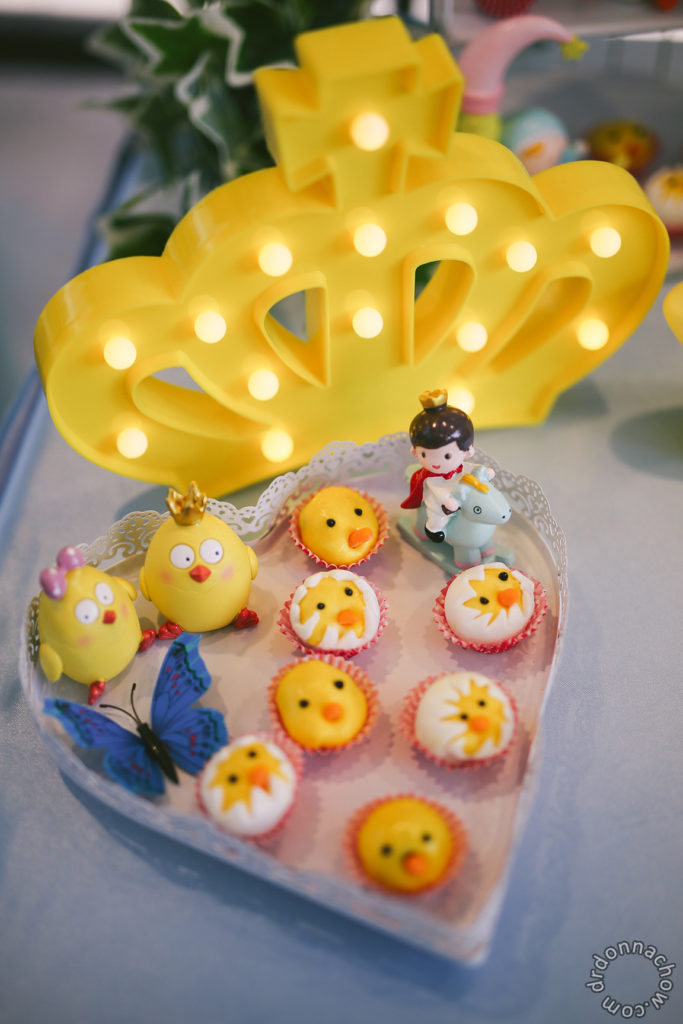 My other experiment was the Oreo cookie pops. It was made of oreo cookie crumbs mixed with cream cheese, wrapped in melted chocolate and rolled fondant. 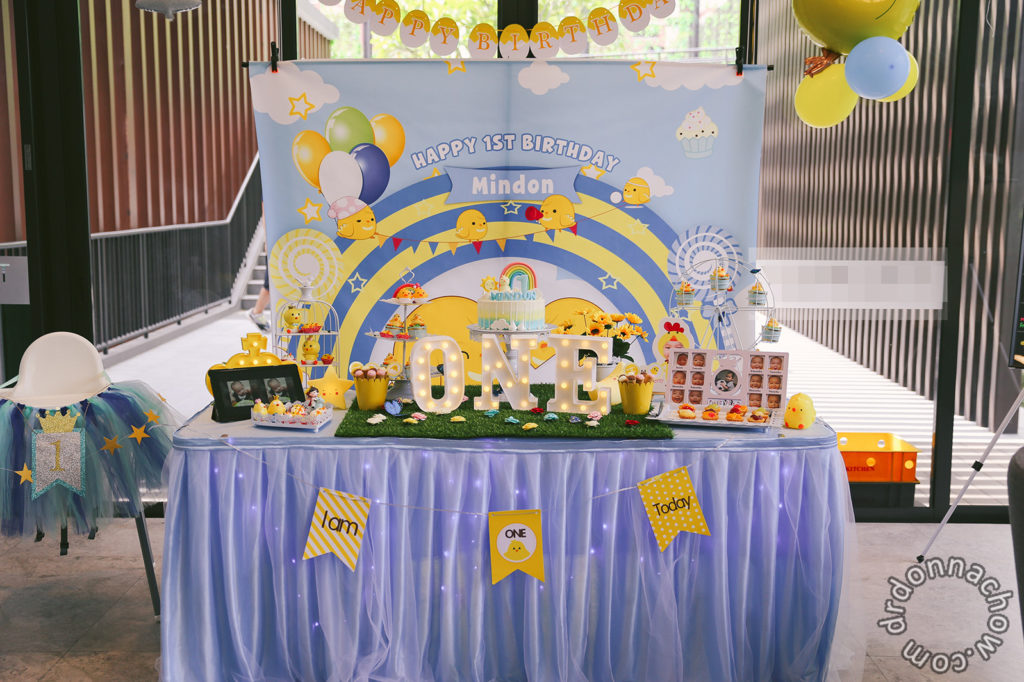 I customized the party backdrop from taobao. It came with a much lower price tag ($20) compared to the earlier one I custom-made locally ($100) for Kandon’s first party. I managed to sell off some of the party decorations on carousell while I was decluttering the house. 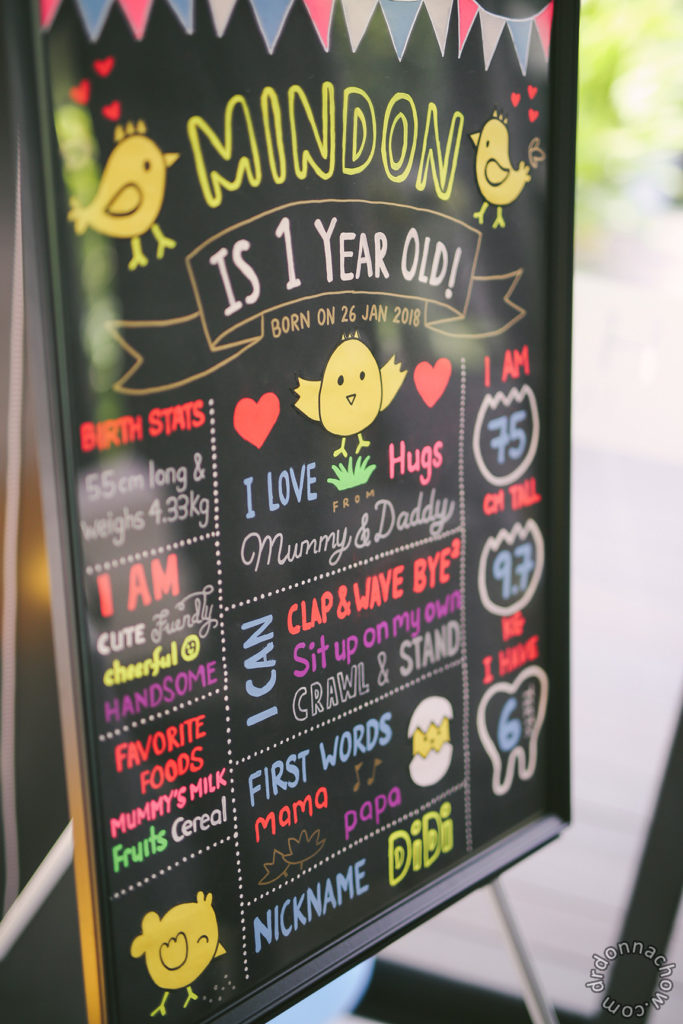 In the weeks preceding the party, I designed and drew his milestone board – by hand. It took me several days and nights. And my masterpiece was mounted on an Ikea poster frame and perched on top of an easel stand which I bought off lazada. 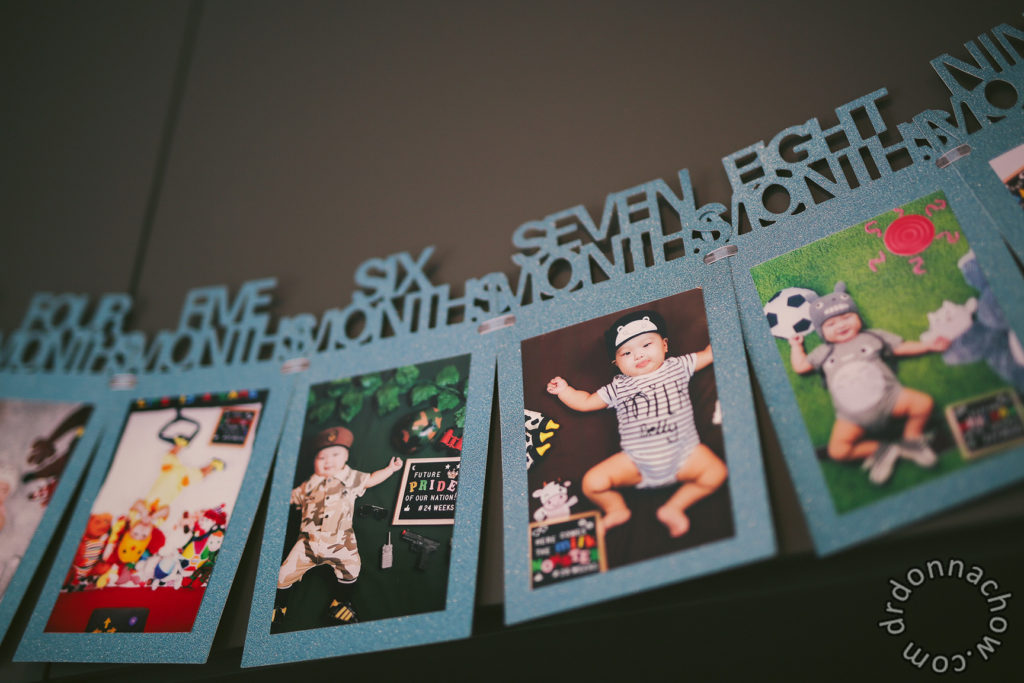 I got these milestone party banner from taobao as well. A lovely way to present his serial growth throughout the entire year. Took me some time to select and sort through his photos, converted the orientation from landscape to portrait and print it out on my canon selphy printer. 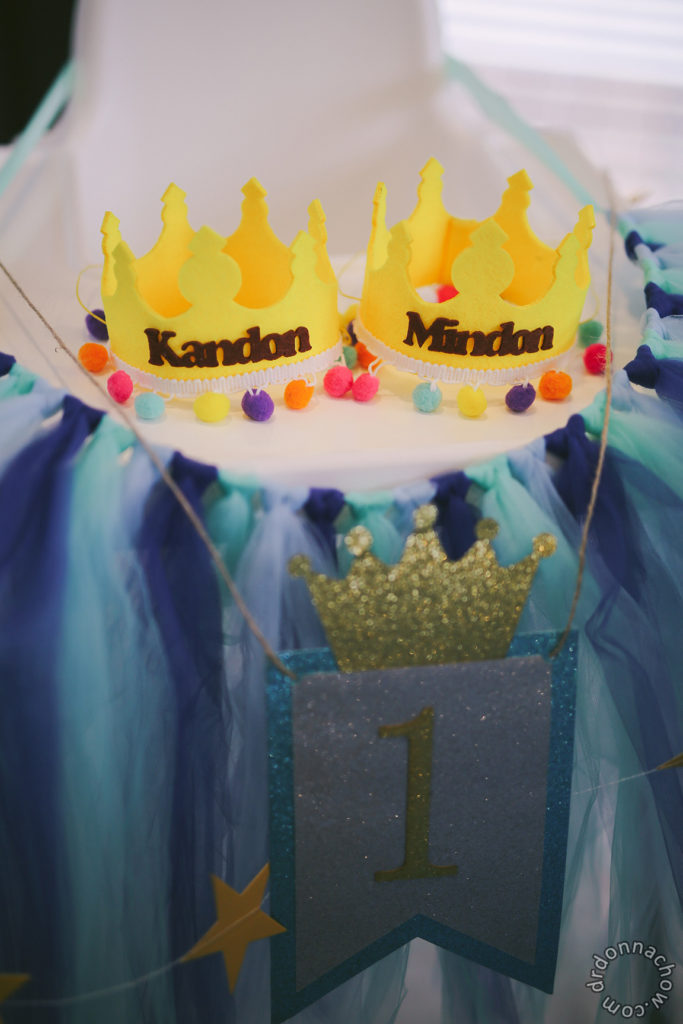 Customized party hats on a high chair with tutu skirting

And I got these customized party hats for the boys on Taobao as well. Love it so much and they can wear it again and again for their future birthday parties. Taobao is indeed a treasure trove for party ideas. 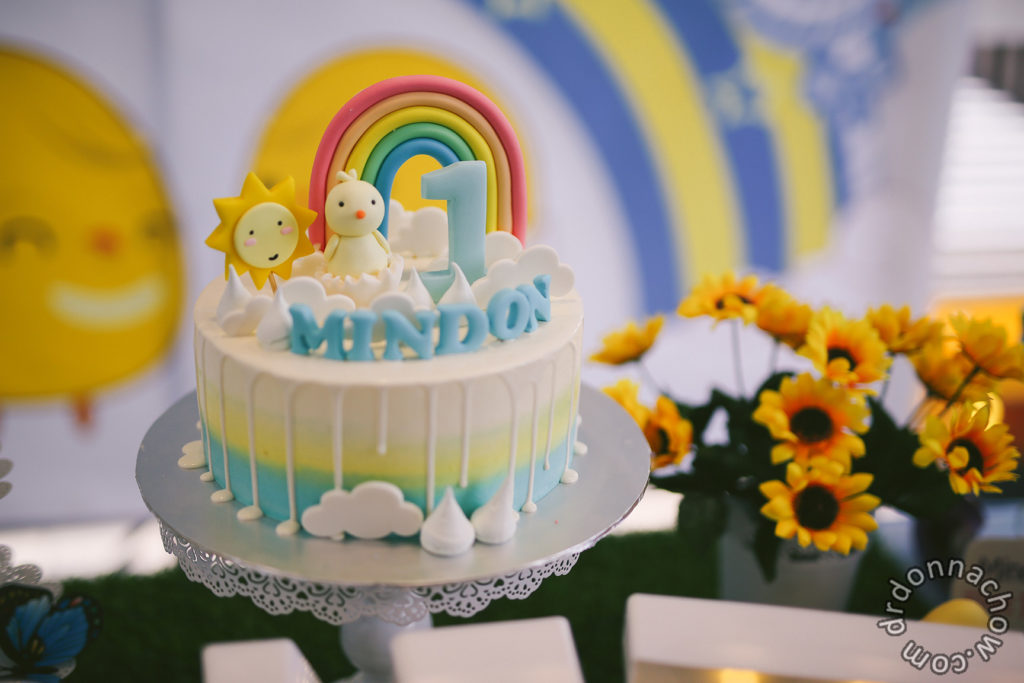 His birthday cake was customized from Charlotte Grace. They managed to fulfill my requests of having fondant figurines on a cream cake base. The cake was of a lychee flavour but since I was too busy, I didn’t get much of a chance to eat it in the end. 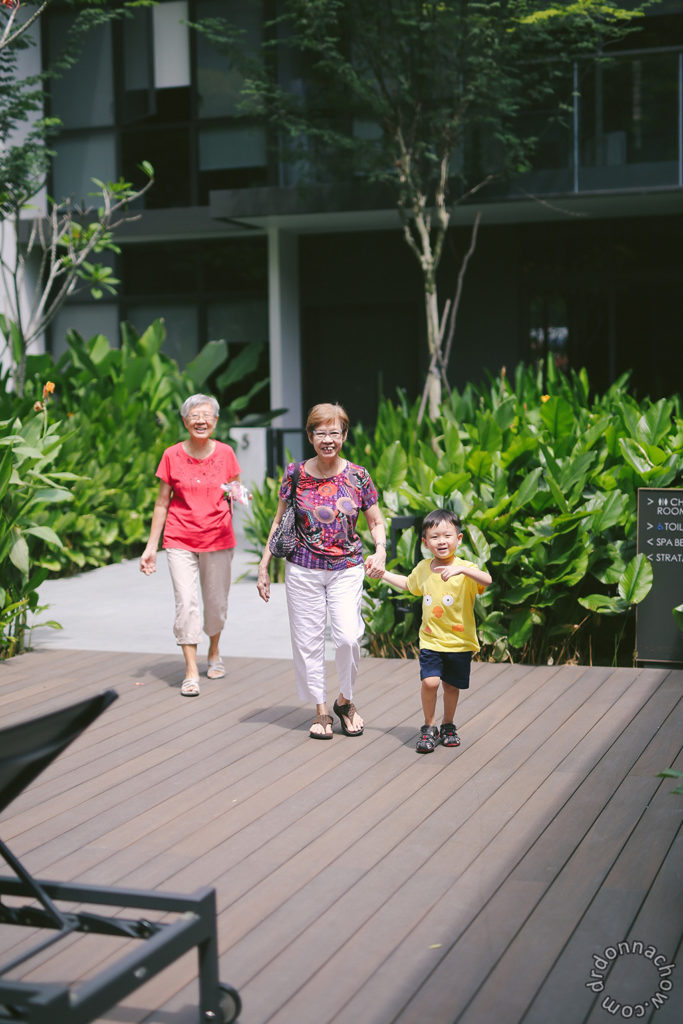 The little usher bringing in the guest to the party 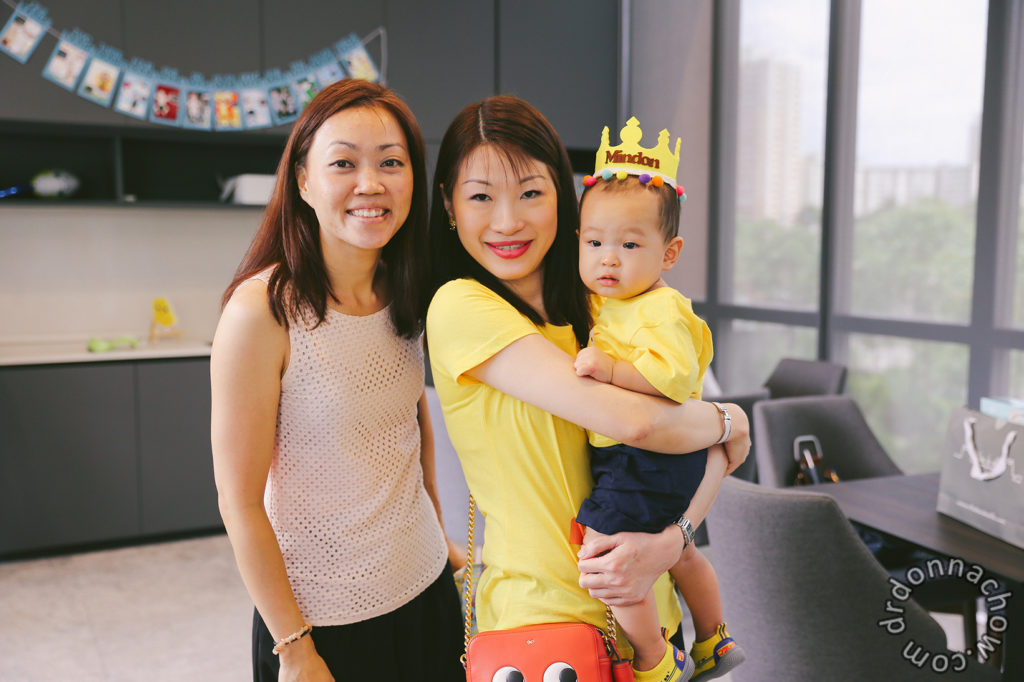 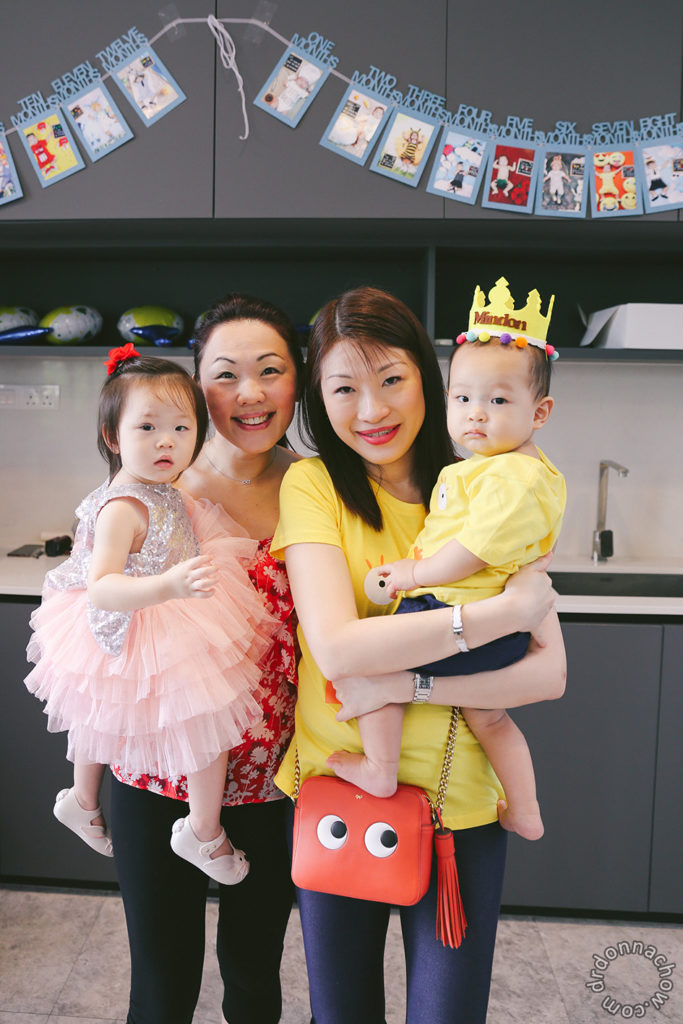 The Chicken Prince and the Princess

We hired Cloud Chew Photography for the event. He was the same photographer we used for Kandon’s first year party. It’s always good to have someone else get behind the lens to capture the candid moments so that you can free yourself doing other stuff. 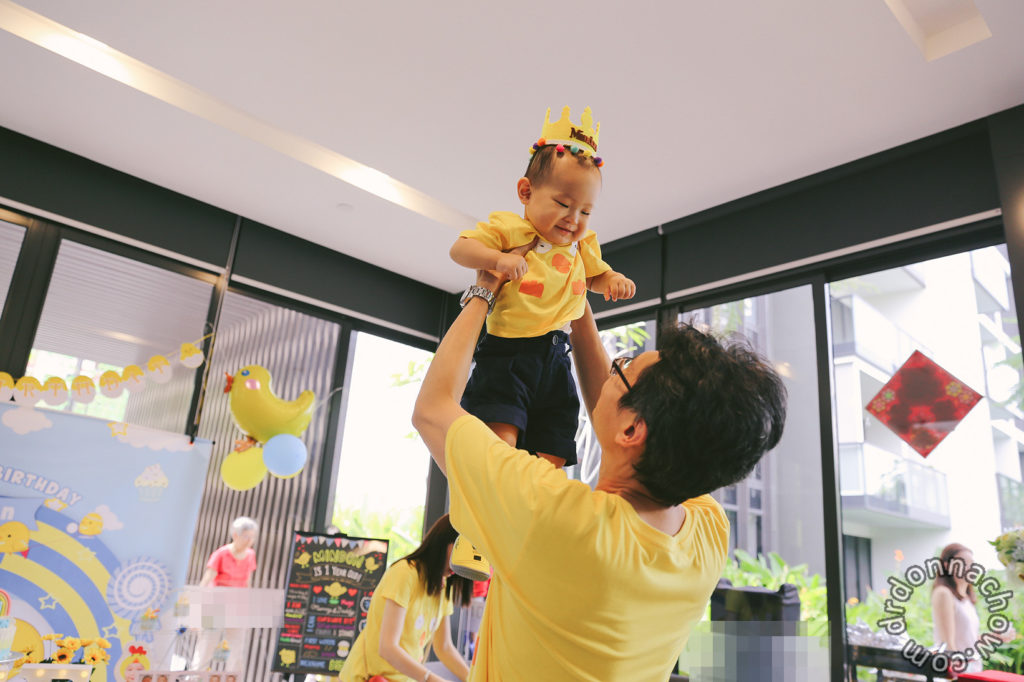 On top of Daddy’s world 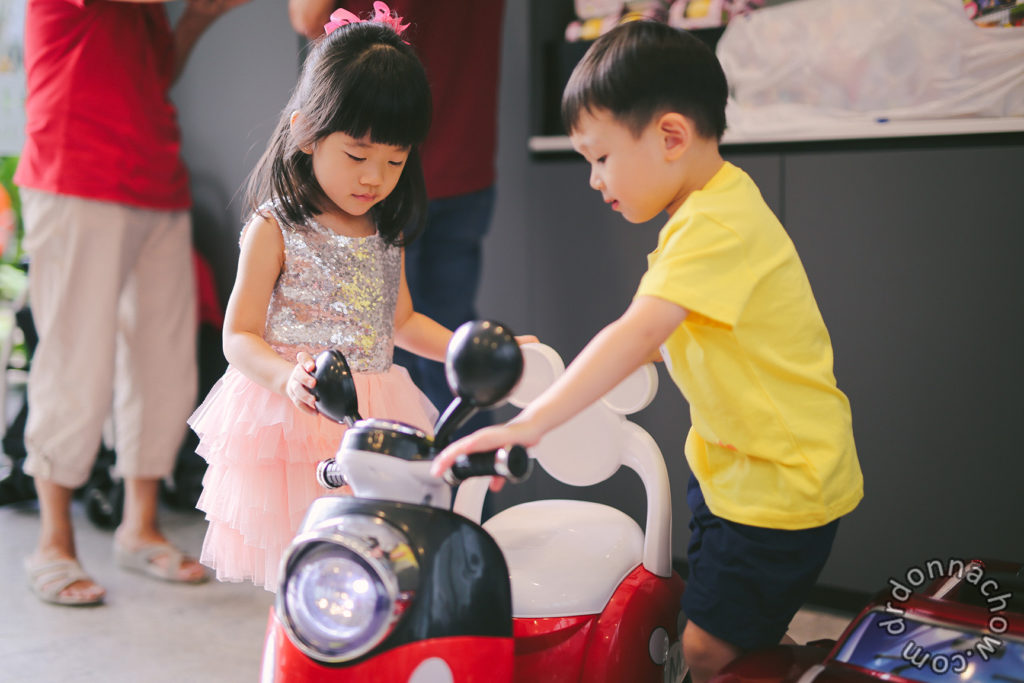 Cosying up to his little girlfriend

And while we were all busy with the preparation, we found the little guy trying to teach his little girlfriend how to ride his Mickey mouse scooter. Even at a young age, he’s a ladies’ man. 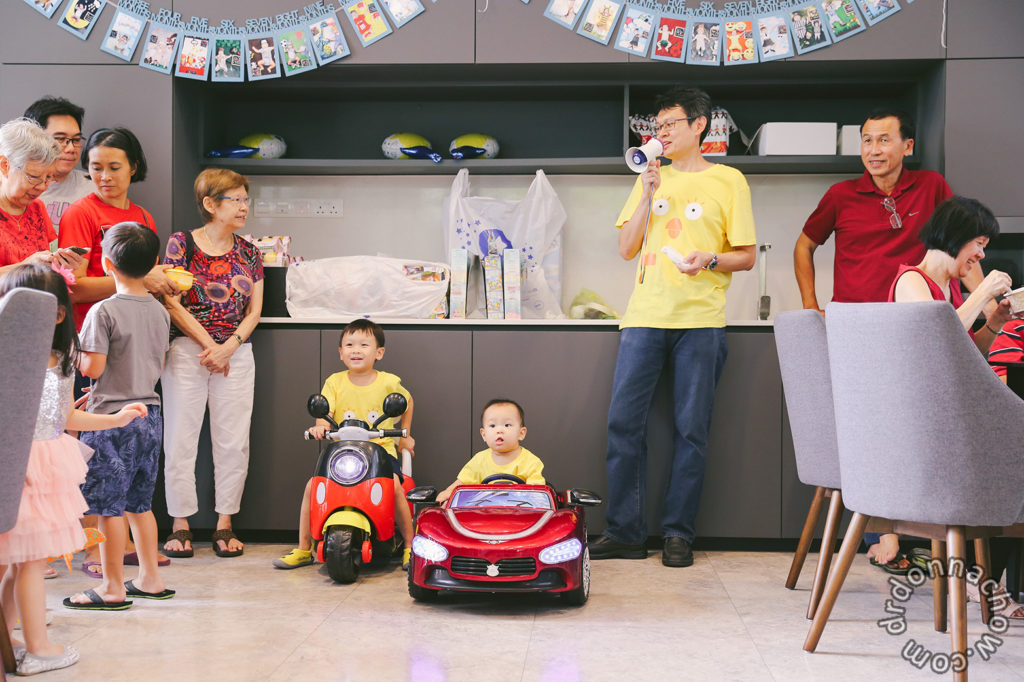 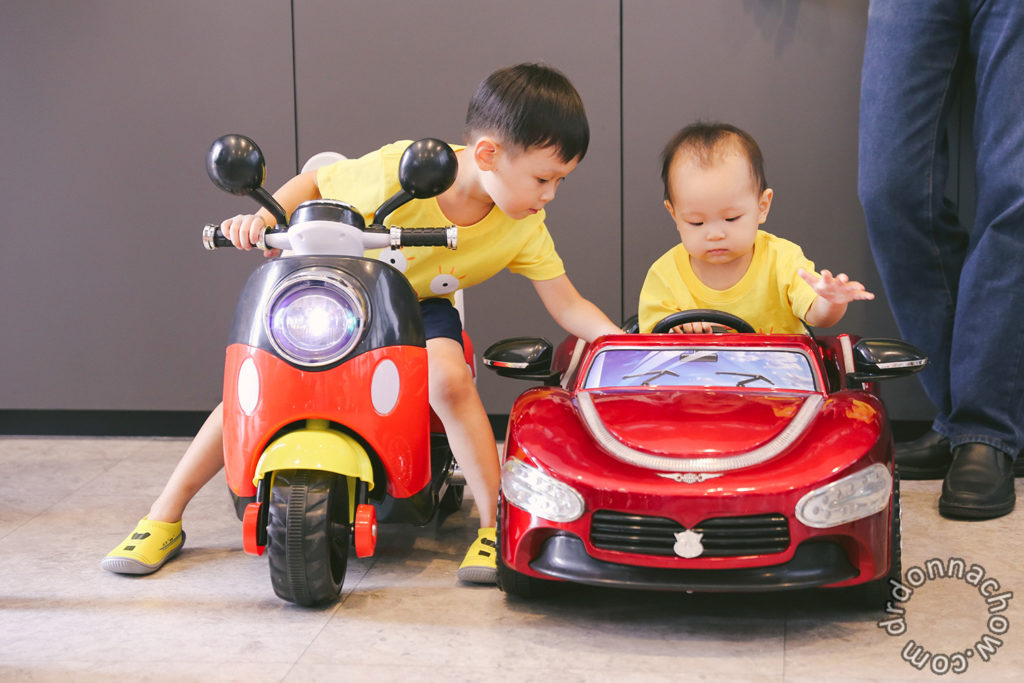 I help you start your engine first. 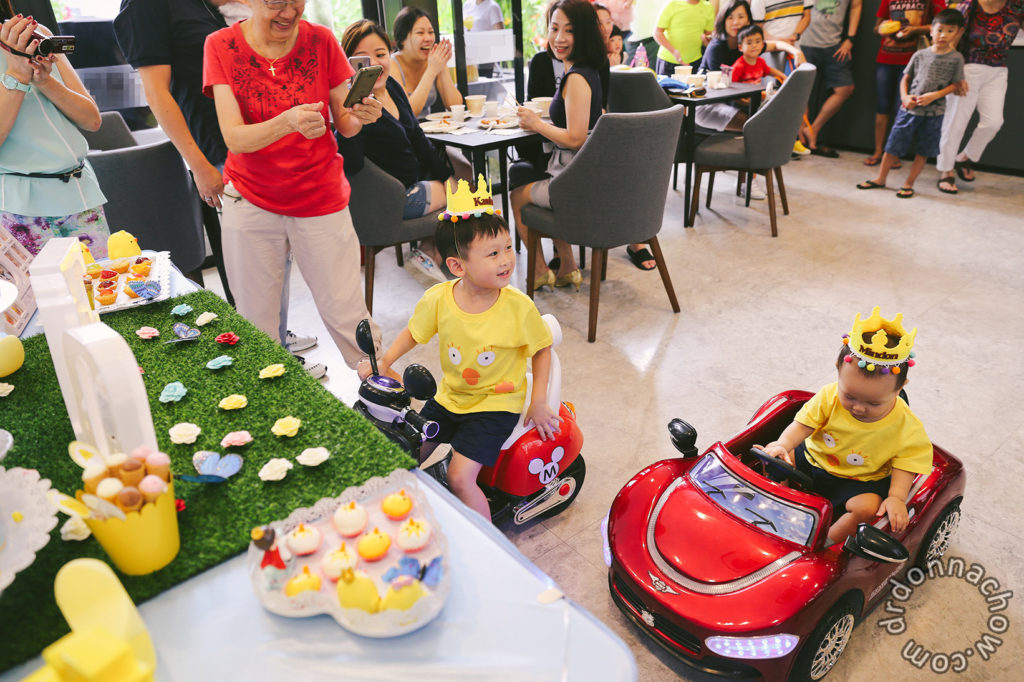 The winner takes it all!

The little red car was the same one we used for Kandon’s birthday 3 years ago. We changed the battery once and it was as good as new. And we got the Mickey scooter for Kandon so that he could ride in with his baby brother. 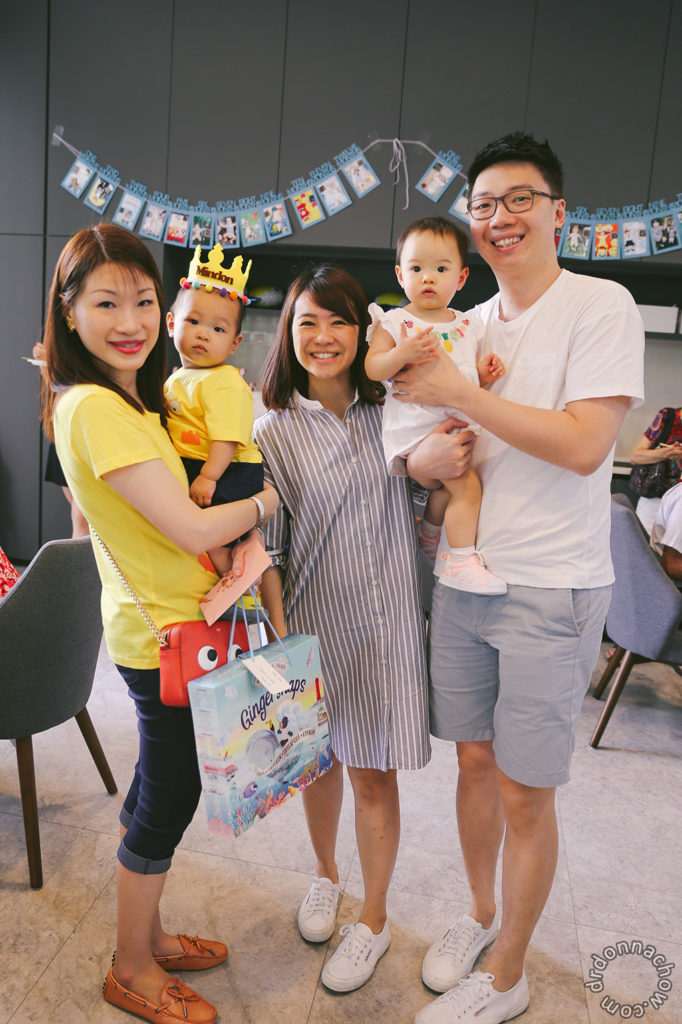 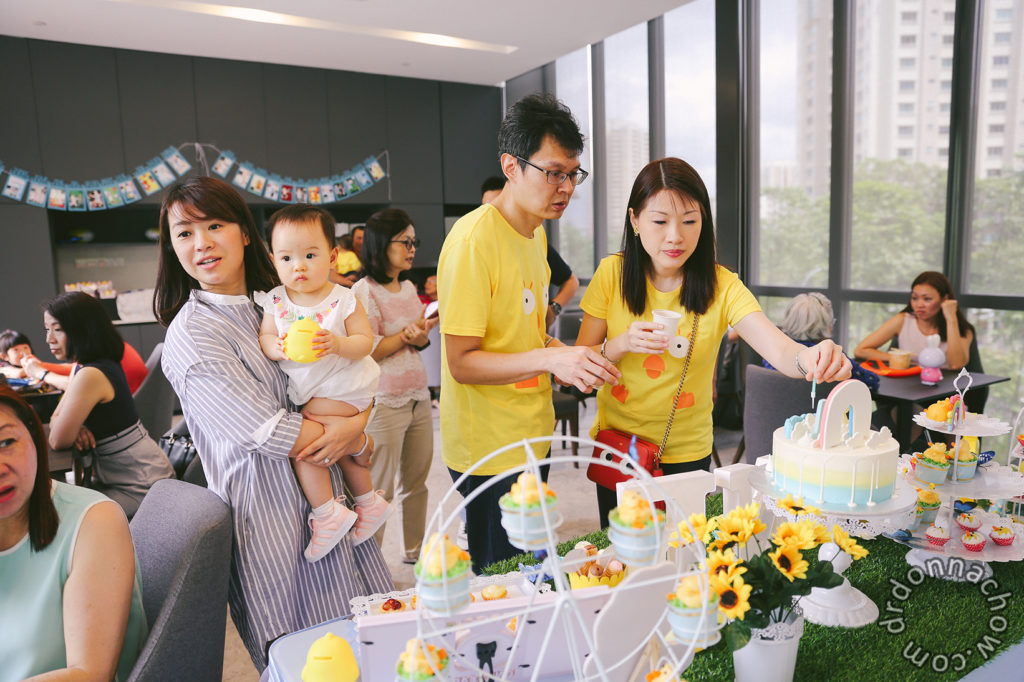 Attending to the details of the cake 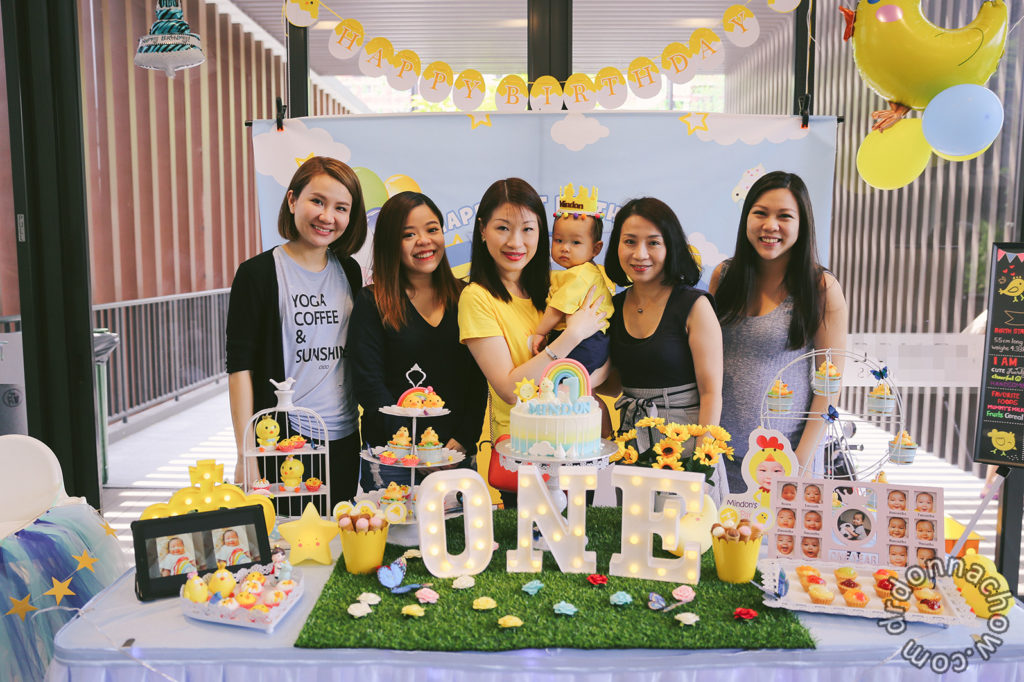 Ex-colleagues turned friends who came for the celebration 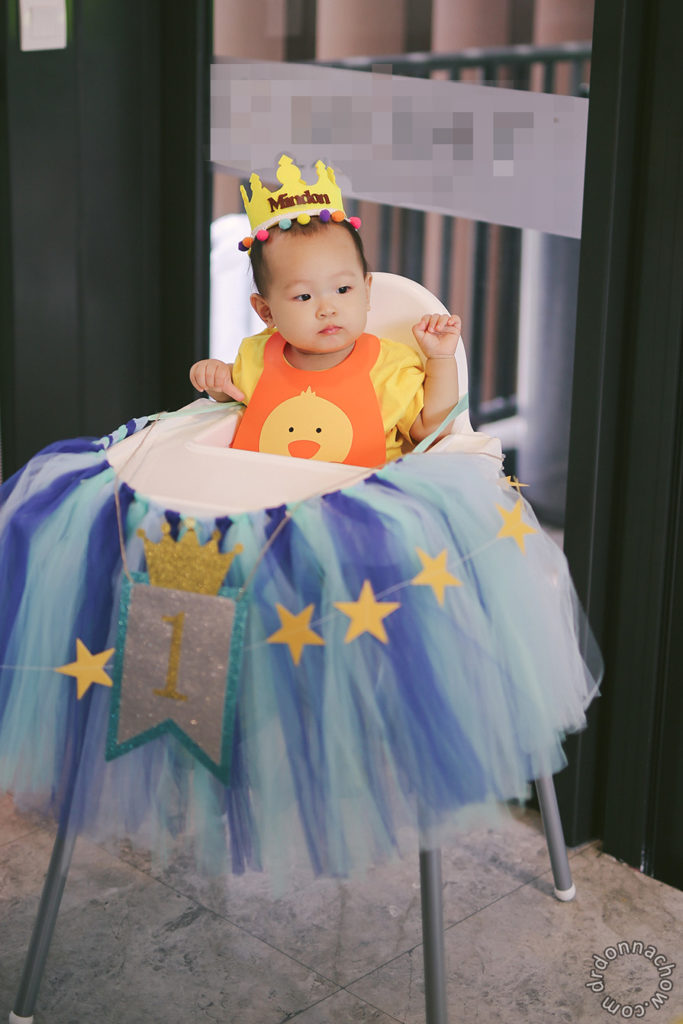 Birthday boy waiting for his food to be served 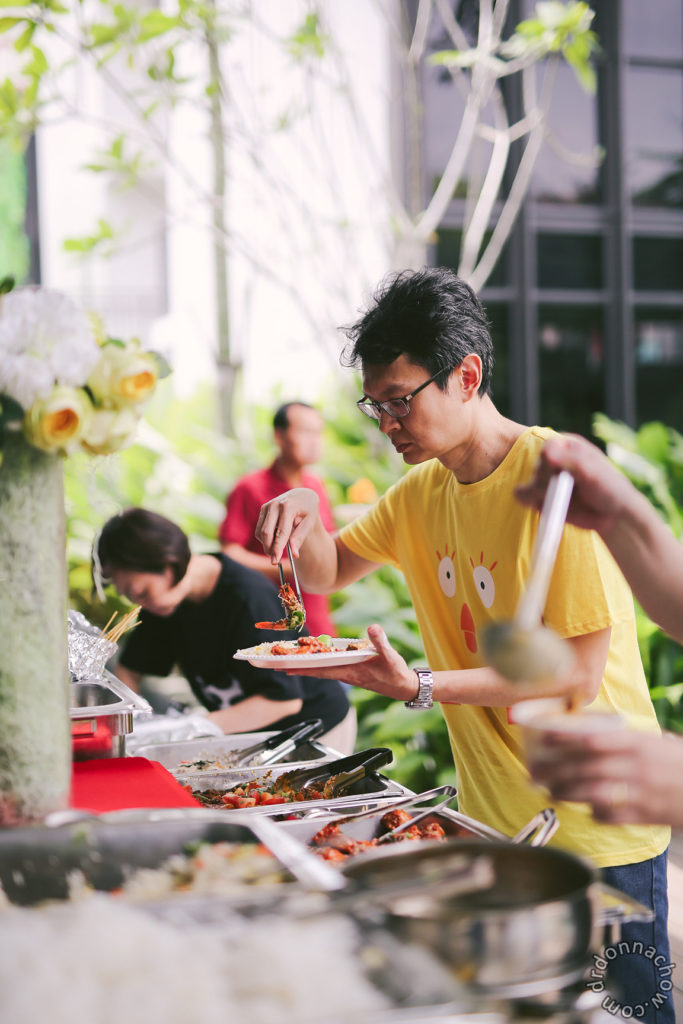 We catered food from Mum’s kitchen. Food portion was decent and the oven baked prawns, mutton rendang and signature laksa was quite yummy.

We are thankful for the guests for showing up for Mindon’s first year celebration. May he grow up with lots of love and good health in the years that follow.

Hi Dr Donna, may I know what kind of colour pens/markers you use to draw the milestone display board?

Hi Brenda, I used a combination of Daiso fluorescent whiteboard markers and gold/silver markers I got from Popular bookstore. The chicken is cut out from coloured construction paper. The background is a black 50×70 cm paper from Popular as well. I may have trimmed it a little to fit the Ikea frame. Hope that helps.

Thanks for the info, Dr Donna!